Below, we outline: where the hotspots are, how things have changed over the last few years, dig into the local detail, then suggest some next steps.

Where do lots of raids happen?

There is no single huge outlier area, with loads more raids happening there than elsewhere. In general, the more people living in an area, the more raids there are: 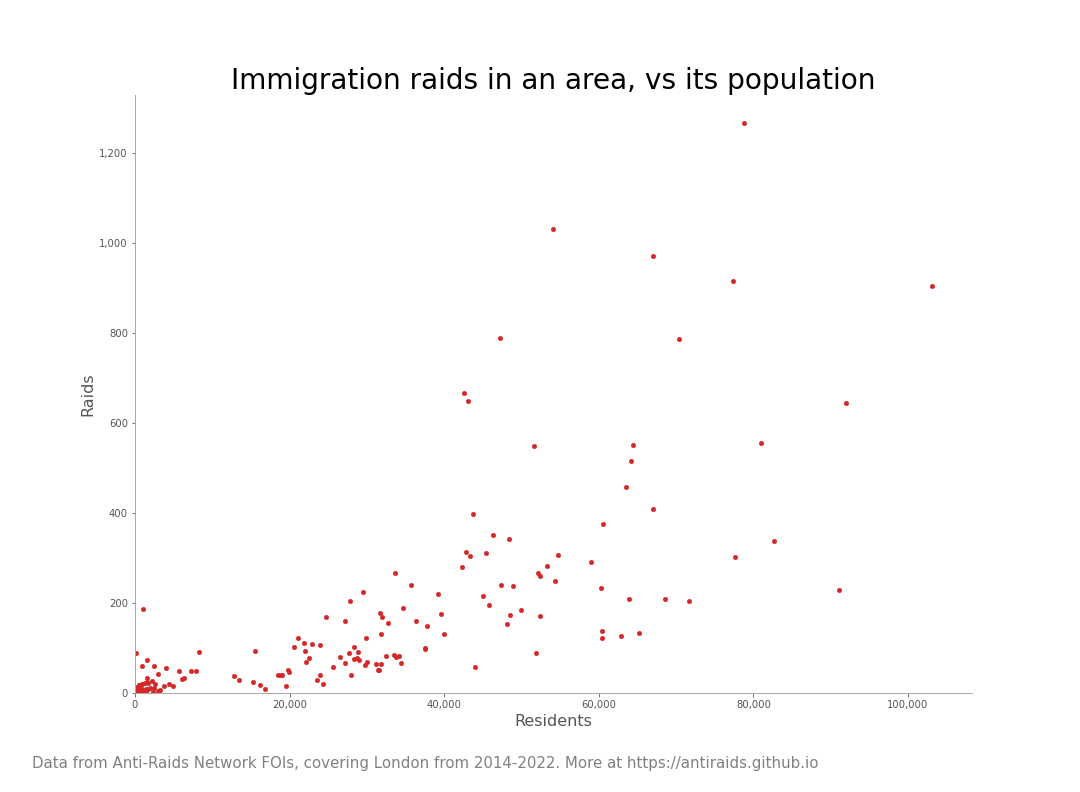 As a network of anti-raids groups, we want to know areas where there are both a high number of raids, and a high rate of raids -- as they could be prime areas for new anti-raids organising.

Looking from this angle, in the top 20 there are areas covered by existing anti-raids groups — e.g. N15 and N17 by Haringey Anti-Raids, E15 by Newham Anti-Raids — but also lots of areas without known organisations working against raids. 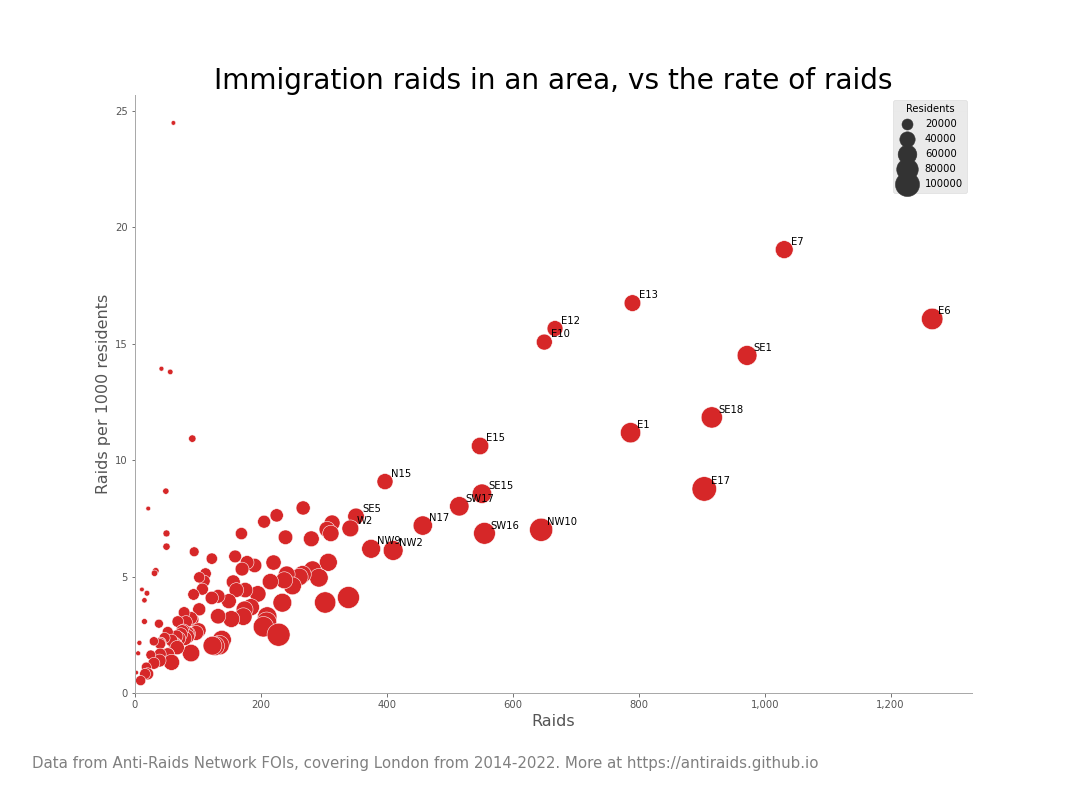 Why are there more immigration raids in some places than others? 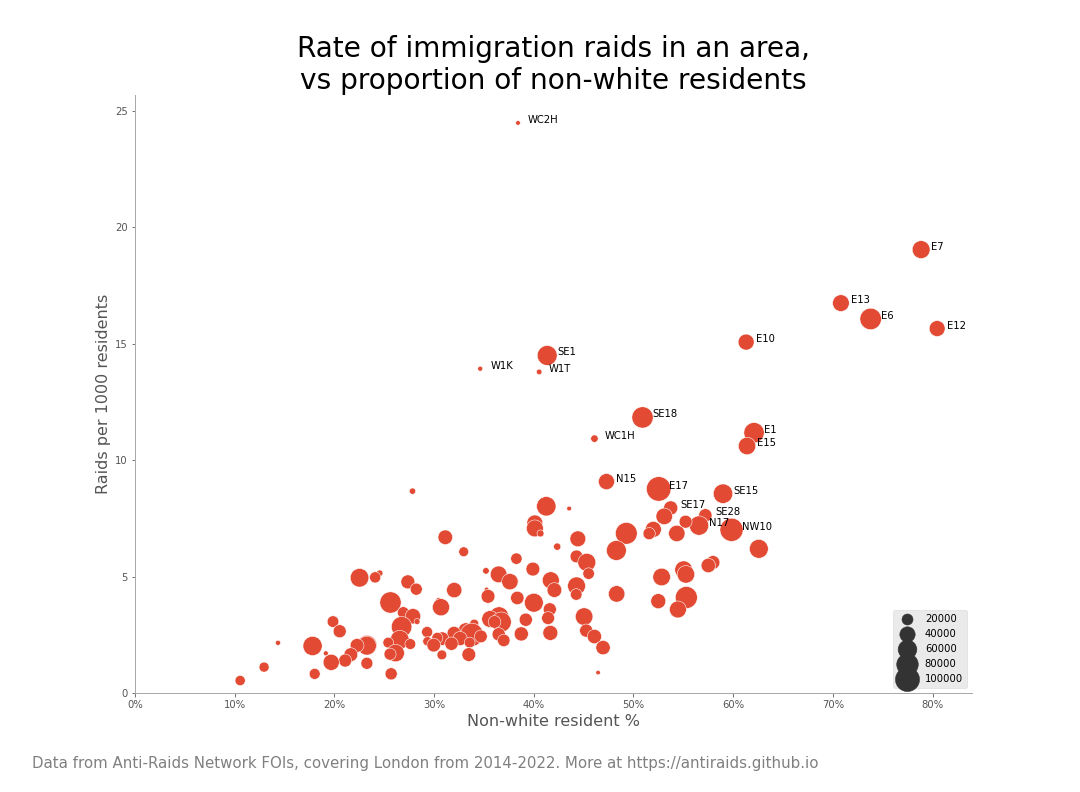 Not all migrant communities are harassed by ICE equally. In other reports, for example we see Indian and Pakistani migrants making up a high proportion of people deported, vs a relatively low rate of people from the Middle East. And that seems to be broadly in line with our immigration raids data: 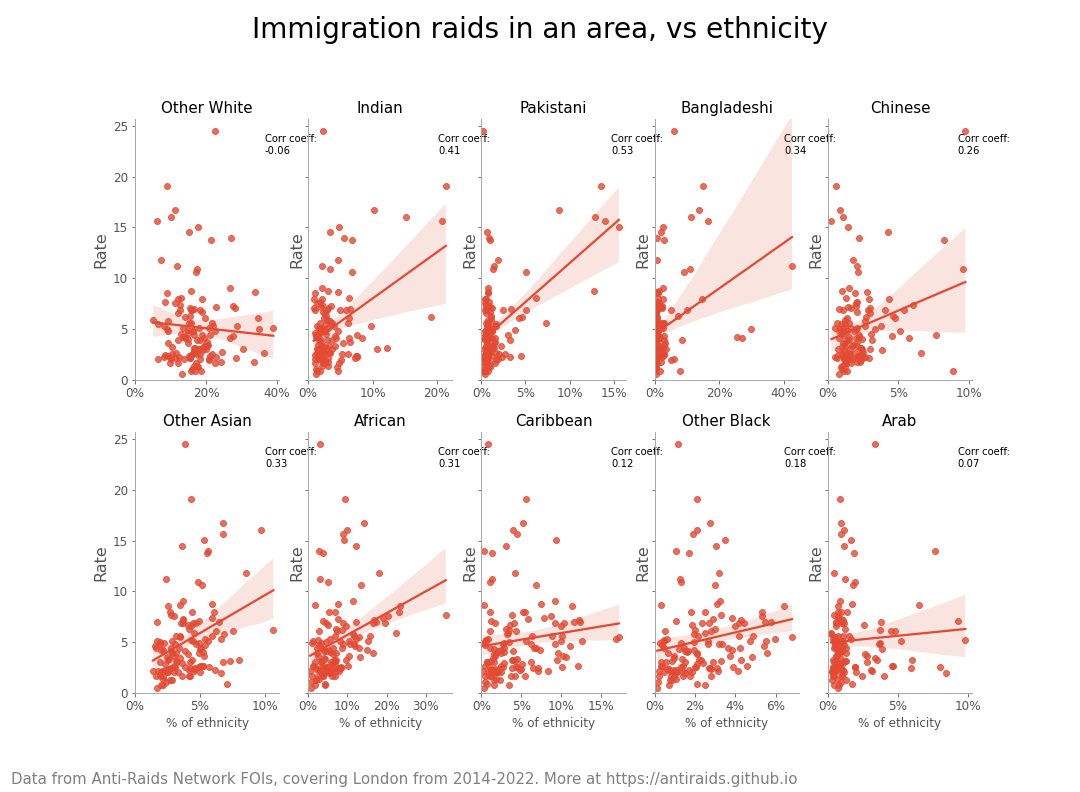 How many racialised migrants an area has is just one reason why raids might vary from one area to another. There are likely lots of other factors at play too. If you want, you can grab the FOI data itself from our Github and play around to see any other links.

Have raids gone up or down in the last few years?

Before the pandemic, there wasn't a simple narrative like "raids have consistently fallen over the last few years". Some areas went up, some went down, some were all over the shop.

One trend that looked like it was starting was a drop in the areas where there were the most raids 2014-7 (150+/year).

But now, one thing stands out above all else: in 2020-21, the years of the pandemic, there was a huge drop in immigration raids basically across the board. The areas with the most raids before the pandemic continued their decline, and saw the biggest drops. 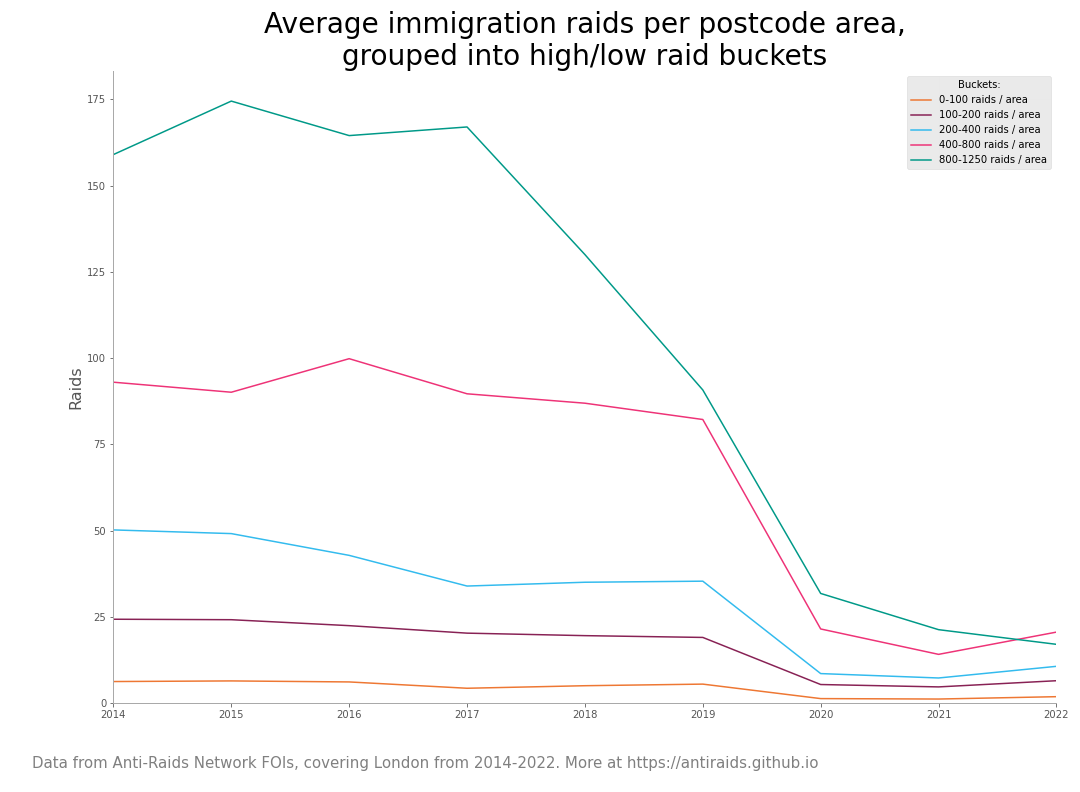 Digging down to your area

To make the data a bit easier to plough through, we have broken it down into line graphs for each section of inner London:

Use the legend in the sidebar to highlight postcode areas. Use the controls at the bottom to zoom in, scroll around, and reset.

Use the search bar on the left to zoom in on a postcode area (e.g. E9). Use the selector on the right to toggle between the absolute count of raids, and the relative rate of raids per 1000 residents.

We think that immigration raids are best resisted at the local level. You can use this data to find out what's happening in your area.

We have active local groups in Haringey, Newham, and new groups in Waltham Forest, Hackney, Southwark and Lambeth, Lewisham, West London, and Tower Hamlets (as well as groups across the UK in Edinburgh, Sheffield, Leeds, and newer groups in Liverpool, Glasgow, Manchester and Newcastle).

If there's not an anti-raids group in your area, then:

Good luck in the struggle!

FOI: "Freedom of Information", shorthand for requests made to public bodies for information under the Freedom Of Information Act.

Immigration raid: the name for when the government goes into a local area, with the intention to detain people under "immigration enforcement" powers, for harassment and deportation. Sometimes just called "raids" for brevity.

FOI requests sound complicated, but it's just a fancy way of saying "email the government and ask for something". Here is an example:

To whom it may concern,

I am writing to you under the Freedom of Information Act, to request information held by you.

I request an update to a previous FOI:

Please do not hesitate to get in touch if I can clarify any of the above. I look forward to hearing from you within 20 working days.

Just make sure to change the postcodes you're asking for, and your name! The Home Office's FOI email address can be found on the Gov.UK website; and you can find a guide to making FOI requests at WhatDoTheyKnow.com.